OUR friends at Aquarian Theosophist recently discussed quantum physics from the movie, What the Bleep Do We Know!?

But to go down the rabbit hole means you are a participant, that you access what retired math professor and electronics engineer Ellis Peterson calls the “quantum ocean” in his article below.

And, in accessing the quantum ocean, preconceived notions about the world change. 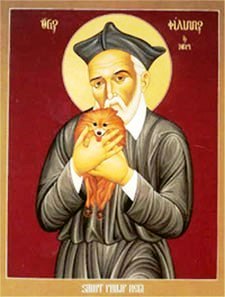 Take 16th century Saint Philip Neri (above), for example, whose mission involved challenging stilted thinking. He might give a sermon with half of his beard cleanly shaved off, or ask a haughty and proud patron to walk his dog. When he saw the patron walking his dog on a leash, he cried,

“What are you doing?
I asked you to walk my dog!”

Then he instructed the patron to carry his dog as he walked along in the city. Saint Philip loved dogs…and so, when he entered the quantum ocean and bilocated, he also bilocated his dog with him.

The May 17, 1891 edition of The Washington Post included an interview with Theosophy co-founder William Quan Judge (A Blavatsky Yarn) in which he gave an account of Madame Blavatsky’s dip into the quantum ocean.

“Two years ago,” Judge said, “I lost here in New York, a paper that was of considerable interest to me. I do not think that anybody but myself knew that I had it, and I certainly mentioned to no one that I had lost it.

“One evening, a little over a fortnight ago, while I was sitting in Madame Blavatsky’s parlor with Mr. B. Keightly and several other persons, I happened to think of that paper.

“The madame got up, went into the next room, and returning almost immediately handed me a sheet of paper. I opened it and found it an exact duplicate of the paper that I had lost two years before. It was actually a fac simile copy, as I recognized at once.

“I thanked her and she said: ‘Well, I saw it in your head that you wanted it.’

“It was not a thing to astonish any one acquainted with the laws of nature as comprehended by occultists, who understand clearly how consciousness of my thought was possible, how the reproduction of a thing once within my knowledge was necessarily fac simile, and how that reproduction could be effected by a simple act of volition on her part, but it would puzzle materialists to explain it in accordance with the facts.”

(This story was also published in the New York Times, January 6, 1889, and reprinted by the Blavatsky Study Center here.)

The Age of Aquarius is upon us. The Age of Pisces is without any energy to continue to sustain itself. All Piscean structures such as formal religions will soon go the way of the extinct Do -Do bird.

The Age of Aquarius has just begun and has 1950 years to go. This is the “End Time” all the prophets have spoken about.

The world of Theosophy, although written in the language of the Piscean Age is timeless. It contains many of the seeds of the Laws of Quantum Physics which is one of the gifts of the Age of Aquarius.

All the great writers and thinkers of the Theosophical Society wrote and spoke about the timeless Ancient Wisdom.

Now it is time for the 21st Century Age of Aquarius writers and thinkers to show the validity and connection of the Ancient Wisdom with the Laws of Quantum Physics.

I will attempt to make a start and hope those more gifts will take up the Lamp of the Age of Aquarius and update the Ancient Wisdom using the language of the Laws of Quantum Physics.

The Ocean of Theosophy

William Q. Judge was a proficient writer of the Theosophical Society. Below are some Quotes from his book, “The Ocean of Theosophy,” (1893) with my commentaries of the Laws of Quantum Physics.

“Theosophy views the Universe as an intelligent whole, hence every motion in the Universe is an action of that whole, leading to results, which themselves become causes for further results.”

“Theosophy applies to the self, the thinker, the same laws which are seen in operation throughout nature. All varieties of this Great Law state that effects follow causes and you can not have an effect without a cause.”

Judge is explaining the Laws of Quantum Ocean in the metaphysical flowery language used in the Age of Pisces.

The Laws of Quantum Physics simply tell us that there exists an infinite ocean of thinking, intelligent energy called the Quantum Ocean. This is the Mind of the Creator God.

The ideas of Theosophy always existed in the Quantum Ocean, Mind of God. They ‘blink out’ periodically into the physical world according to some divine timing blueprint in the Mind of God.

In the 19th Century they “blinked out” of the Quantum Ocean and into the mind of H.P. Blavatsky. She wrote about it and started the Theosophical Society.

Now in the Age of Aquarius it is time for the wisdom of the 19th Century Theosophical ideas to ‘blink out’ in a new modern language, the Laws of Quantum Physics. That is my job and yours if you so desire.

When you read the words of William Q. Judge, keep the Laws of Quantum Physics as described above in your mind, and notice the similarity.

“Theosophy is not a belief or Dogma formulated or invented by man, but a knowledge of the Laws which govern the evolution of the Physical, Astral, Psychic and intellectual constituents of Nature and Man.”

The Quantum Ocean contains the “ALL.” All the Divine blueprints for mass evolution, the evolution of planets, Galaxies, Universes are there. Enlightened Man/Woman or CONSCIOUS Man/Woman such as Blavatsky and Judge needed only to enter the Quantum Ocean (Meditation) and Mind of God and bring them out. They brought them out at their own level of consciousness and explained it in their own language.

Paul said, “I see through glasses Darkly.” We all see reality through our own dark glasses of understanding.

It is time for us in the 21st Century man to enter the Quantum Ocean and bring out the truths of Theosophy using the language of the Laws of Quantum Physics.

“Theosophy is wisdom about God, Wisdom and Nature, embracing both the scientific and the Religious. Theosophy is a Scientific Religion and Religious Science.”

Nature and Man are the physical manifestation of the blueprints in the Mind of God.

The strength of Theosophy lies in the fact that it is not to be defined. It is the Wisdom of the Gods, or of Nature. Evolution slowly progressing will bring out new truths. Words cannot explain Theosophy to all. It is the whole body of Truth about Man and Nature, either known now or here-after. To be discovered it has the power of growth.

Who can define what is in the Mind of God?

Now go back and re-read William Q. Judge and see how he was talking about the Laws of Quantum Physics from his 19th century perception. 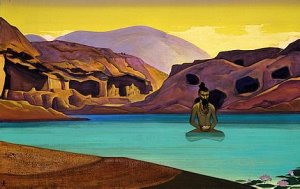