ASTRONOMERS reported last week that each of the 100 billion stars in the Milky Way “probably has at least one companion planet, on average, adding credence to the notion that planets are as common in the cosmos as grains of sand on the beach.”

“The finding underscores a fundamental shift in scientific understanding of planetary systems in the cosmos,” reports Robert Leet Hotz in the January 12, 2012 Wall Street Journal. “Our own solar system, considered unique not so long ago, turns out to be just one among billions.”

“There are millions and millions of worlds and firmaments visible to us,” prophesied H. P. Blavatsky over 120 years ago in The Secret Doctrine (1:605), before our modern astronomical techniques and equipment existed.

“And there are still greater numbers,” she wrote, “beyond those visible to the [in her time] telescopes […] such invisible worlds do exist.”

This multiverse, Blavatsky writes knowingly, “is inhabited as thickly as our own,” with worlds “scattered throughout apparent Space in immense number.

…some far more material than our own world, others gradually etherealizing until they become formless and are as ‘Breaths.‘”

“That our physical eye does not see them, is no reason to disbelieve in them. Physicists can see neither their ether, atoms, nor ‘modes of motion,’ or Forces. Yet they accept and teach them.”

Such unambiguous statements beg the question: How did the writers of “The Secret Doctrine,” in the 19th century, know all this? — It is because, it is well known that two of the ‘writers’ were Indian Masters, collaborating with Mme. Blavatsky.

Those Masters were  connected with the “countless generations of initiated seers—whose flashing gaze  (SD 1:272):

“…penetrated into the very kernel of matter, and recorded the soul of things there.”

The Secret Doctrine teachings are, therefore, “the accumulated Wisdom of the Ages,” H. P. Blavatsky says (Vol. 1, Page xxii.),  and “could not be contained in a hundred such volumes.” 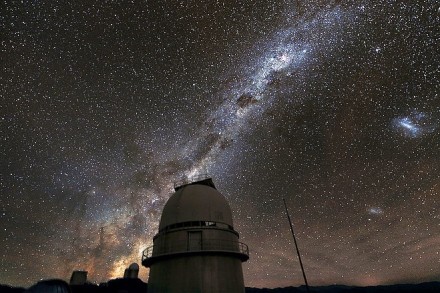 “Astronomers said Wednesday that each of the 100 billion stars in the Milky Way probably has at least one companion planet.” Photo: AP

“Until April 1994, there was no other known solar system, but the discoveries have slowly mounted since then: The Kepler space telescope, designed for planet-hunting, now finds them routinely.

“Planets are the rule rather than the exception,” said lead astronomer Arnaud Cassan at the Institute of Astrophysics in Paris. “He led an international team of 42 scientists who spent six years surveying millions of stars at the heart of the Milky Way, in the most comprehensive effort yet to gauge the prevalence of planets in the galaxy.”

“Astronomers said Wednesday that each of the 100 billion stars in the Milky Way probably has at least one companion planet. Lee Hotz has details on The News Hub.”

“Our Milky Way galaxy contains a minimum of 100 billion planets,” writes Whitney Clavin reporting January 11, 2012 for the Jet Propulsion Laboratory, Pasadena, California, “according to a detailed statistical study based on the detection of three planets located outside our solar system, called exoplanets.

“The study is based on observations taken over six years by the PLANET (Probing Lensing Anomalies NETwork) collaboration, using a technique called microlensing to survey the galaxy for planets.” 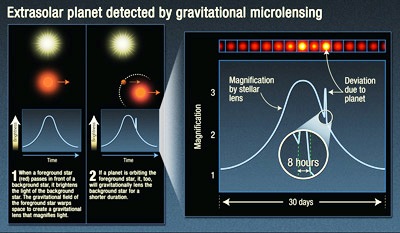 “The discovery, to be reported in the January 12 issue of Nature, was made by an international team of astronomers, including co-author Stephen Kane of NASA’s Exoplanet Science Institute at the California Institute of Technology in Pasadena, California.

Carl Sagan: What is a Star?

“The survey results show that our galaxy contains, on average, a minimum of one planet for every star,” the News Release says. “This means that it’s likely there are a minimum of 1,500 planets within just 50 light-years of Earth. 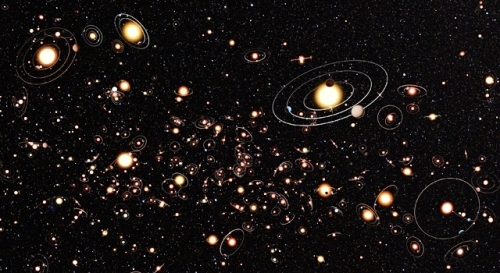 “This artist’s illustration gives an impression of how common planets are around the stars in the Milky Way galaxy. The planets, their orbits, and their host stars are all vastly magnified compared to their real separations. A six- year search that surveyed millions of stars using the microlensing technique concluded that planets around stars are the rule rather than the exception. The average number of planets per star is greater than one.” Image credit: NASA/ESA/ESO

As part of the exhibition The Dragon’s Gift: Sacred Arts of Bhutan, at the Rubin Museum of Art in New York City, Lama Karma Tenzin worked for two weeks to create this intricate sand mandala of the deity Chakrasamvara. He then destroyed it, in keeping with the tradition, in under 2 minutes.

“NOTHING is permanent except the one hidden absolute existence which contains in itself the noumena of all realities. The existences belonging to every plane of being, up to the highest [spiritual beings].

“Maya or illusion is an element which enters into all finite things, for everything that exists has only a relative, not an absolute, reality, since

“…the appearance which the hidden noumenon assumes for any observer depends upon his power of cognition.”

“To the untrained eye… a painting is at first an unmeaning confusion of streaks and daubs of color, while an educated eye sees instantly a face or a landscape.”

“But all things are relatively real — for the cogniser is also a reflection — and the things cognised are therefore as real to him as himself. Whatever reality things possess must be looked for in them before or after they have passed like a flash through the material world.

“But we cannot cognise any such existence directly, so long as we have sense-instruments which bring only material existence into the field of our consciousness.

“Whatever plane our consciousness may be acting in, both we and the things belonging to that plane are, for the time being, our only realities.”

“As we rise in the scale of development we perceive that during the stages through which we have passed we mistook shadows for realities, and the upward progress of the Ego is a series of progressive awakenings,

“Each advance brings with it the idea that now, at last, we have reached “reality;” but only when we shall have reached the absolute Consciousness, and blended our own with it, shall we be free from the delusions produced by Maya.”

2 responses to “We’re Not Alone”