FIRST is the story of Shirley and Jenny, two crippled elephants reunited at The Elephant Sanctuary in Tennessee after a 22-year separation.

The bonding was immediate, intense and unforgettable between the two former circus elephants.

Not a new story but worth watching again and again. So amazingly touching — but long after the cameras were turned off, the wondrous moments would continue…

Tarra and Bella:
A Match Made in Ele-Heaven

“Tragedy struck a pair of unlikely friends who had captured the hearts of caretakers and animal lovers,” The Huffington Post reported: “Tarra the elephant and Bella the dog began their friendship at The Elephant Sanctuary In Tennessee about eight years ago, according to CBS. Last week, Bella was believed to have been attacked by coyotes and died, leaving Tarra to mourn the loss of her best friend.

Bella was first spotted at the sanctuary in the fall of 2003, and died on October 26, 2011. The Elephant Sanctuary set up a tribute page in honor of the deceased canine.  And check out the website for more. 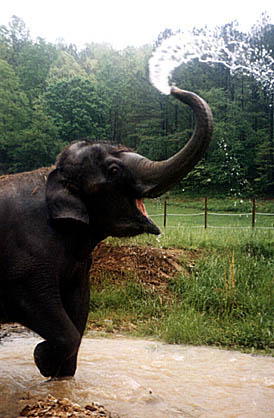 One response to “Elephant Sanctuary: Stories of Joy and Sadness”