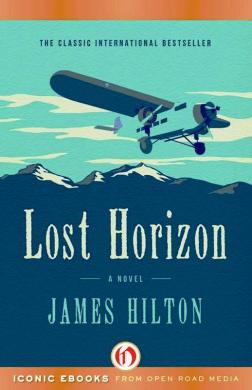 “S’ambhala (Sk).  A very mysterious locality on account of its future associations. A town or village mentioned in the Purânas, whence, it is prophesied, the Kalki Avatar will appear. The ‘Kalki’ is Vishnu, the Messiah on the White Horse of the Brahmins; Maitreya Buddha of the Buddhists, Sosiosh of the Parsis, and Jesus of the Christians (See Revelations). All these ‘messengers’ are to appear ‘before the destruction of the world,’ says the one; before the end of Kali Yuga say the others.  It is in S’ambhala that the future Messiah will be born. Some Orientalists make modern Murâdâbâd in Rohilkhand (N.W.P.) identical with S’ambhala, while Occultism places it in the Himalayas. It is pronounced Shambhala.”

“…are to appear before the destruction of the world’, says the one — ‘before the end of Kali Yuga say the others.”

Its origins lie in the very beginnings of life, Blavatsky explains in The Secret Doctrine (SD II: 400), where the heart of Mother Earth beats

“…under the foot of the sacred Shambalah, which then (in the beginnings) was not yet born.”

She also tells us, in The Secret Doctrine (SD II 319), that the continent of Lemuria’s elect had “taken shelter on the sacred Island…in the [current] Gobi Desert….”

And Master K.H. reveals (Mahatma Letters, 155) that the inhabitants of Shambhala, “when yet an island in the Central Asian Sea,” were called the “Sons of the Fiery Mist” who triumphed over

“…the selfish but not entirely wicked magicians of Poseidonis….”

“Read in this connection,” the Mahatma K.H. suggests, “the incomplete and partially veiled tradition, in Isis, Volume I, p. 588-94.”

I’ve always wondered about the island of Shambhala and the notion of an ocean in the Gobi Desert. Is there any geo-scientific evidence for this?

Some years ago, I asked a professor at UCLA’s Department of Earth and Space Sciences this question and he said that the Gobi Desert, which spans areas of China and Mongolia, had indeed been covered by water at one time! So, the legend can be substantiated.

But it would be Nicholas Roerich who would lead a five-year scientific and artistic expedition of Central Asia in 1923 — the first expedition to cross the Tibetan Highlands, north to south, from western China to India.

A noted archaeologist and artist, Roerich was the first to capture the magnificence of the Himalayas — the subject of a number of his 7,000 paintings.

Roerich was also the first Buddhist nominated for the Nobel Peace Prize.

About the same time William Quan Judge first met Helena Blavatsky in New York City in the fall of 1874, Nicholas Roerich was born in St. Petersburg, Russia. After arriving in the US in 1920,

Nicholas and his wife, Helena, became dedicated Theosophists, and Helena translated The Secret Doctrine into Russian.

Their 15,500-mile journey throughout Asia, taking their sons with them, was an extraordinary and dangerous adventure involving, for example, the crossing of 35 mountain passes from 14,000 to 21,000 feet in elevation.

“But these were the challenges [Roerich] felt born for,” the Roerich Museum explains on its website:

…”believing that the rigor of the mountains helped a man to find courage and develop strength of spirit.

“And in spite of obstacles, wherever they went the Roerichs’ belief in the essential goodness of life

…and the spirituality of man was reinforced.” 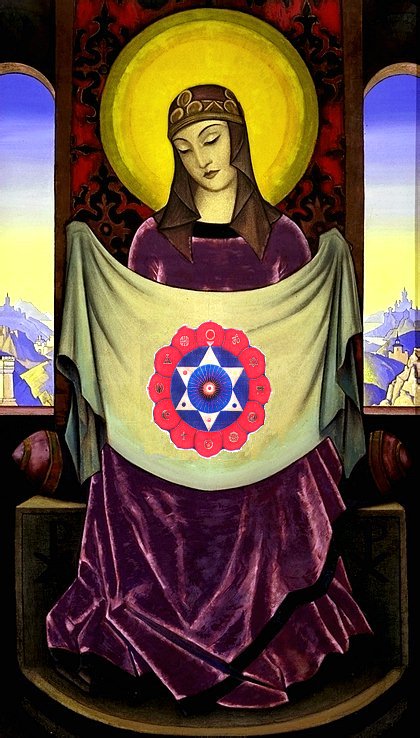 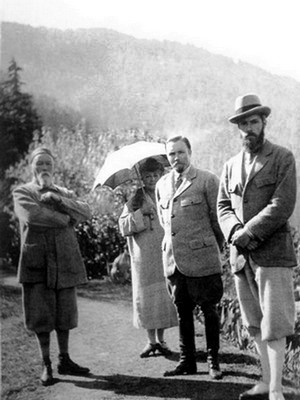 Below, a video collage of a tiny sample of Roerich’s 7,000 paintings, accompanied by Composer Vangelis’ “Cosmos.”

FDR, The Gobi,
and Climate Change

The expedition was funded by the U.S. Department of Agriculture and organized through the help of then Secretary of Agriculture Henry Wallace (later, vice president with FDR), a student of Roerich. One of the purposes was to gather samples of drought-resistant grasses for the Great Plains areas.

Scientists and other specialists at USDA were initially ecstatic about planning the expedition since the Gobi Desert at the time was one of the last unexplored places in the world.

When they found out, however, that a Russian familiar with the Gobi Desert was leading the expedition instead of one of them, they expressed xenophobic resistance in complaining.

But it was President Roosevelt himself who proposed the expedition as he believed that trees at one time grew in the Gobi Desert and that when the trees were cut down, the climate changed. If trees could be grown there again, he thought, it would correct the climate.

But for the Roerichs and Wallace, the expedition also meant the possibility of  finding Shambhala.

Wallace would later be scandalized when he ran for president by an ultra conservative journalist who published some of Wallace’s personal letters to Roerich, dubbing them “The Guru Letters.” What the journalist missed was the secret file President Roosevelt kept of his correspondence with Roerich’s wife, Helena.

Nicholas Roerich chronicled their Asian travels in a number of works, including Altai-Himalaya: A Travel Diary, Heart of Asia, and Shambhala.

“Shambhala itself is the Holy Place, where the earthly world links with the highest states of consciousness,” he explains in Heart of Asia.

“In the East they know that there exists two Shambhalas – an earthly and an invisible one.”

“The Greatest and Holiest of Tangla” from Roerich’s Shambhala series:

The Greatest and Holiest of Tangla

In their search for Shambhala, the Roerichs travelled to Inner Mongolia. Roerich had been a student of the Mongolian Lama Agwan Dorjeff in the early 1900s and the Roerichs lived in Ulaanbaatar, Mongolia in 1926-1927.

The Roerichs’ oldest son, George (1902-1960), was an accomplished scholar in Tibetan studies. One of his many great contributions was the translation of a 15th century Tibetan Buddhist text called The Blue Annals — almost 1,300 pages in length.

When his oldest living student, Mongolian Professor Shagdaryn Bira, was studying an old photo of the Roerichs in front of their home in Ulaanbaatar, he determined to find it and he did. Professor Bira and a group of supporters saved the house from demolition, restored it, and dedicated it as a museum and art gallery this past summer.

Another Tibetan scholar and practitioner Glenn Mullin (aka Lama Glenn), a Canadian who now resides in Mongolia, is promoting the museum project and a symbolic shrine and temple to Shambhala. Sometimes Lama Glenn comes to the Washington, D.C. area for delightful talks and teaching.

Below a short video of Part 1 of a meeting organised by Glenn Mullin with Telo Tulku Rinpoche in the restored Roerich Museum (Ulan Bator, Mongolia. July 2009.) 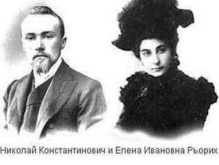 “Trace how the word Shambhala is uttered in the East. Try to penetrate, even in a small way, into the ideology of this concept. Try to understand the rhythm of structure of speech about Shambhala, and you will perceive a great reality which causes the harp-strings of humanity to vibrate. Let reason help you to ponder on the values accumulated by the best strivings.”

(2) Nicholas Roerich Paintings – His Country
From a Series of paintings by the same name plus some extras by the Russian artist Nicholas Roerich (1874-1947) with music played on Tibetan Singing Bowls, plus (around halfway through)Gongs and Cymbals by Frank Perry.

(4) Secrets of Shambhala
Inspired by and featuring the Artwork of Nicholas Roerich, a true artist

5 responses to “Roerich’s Shambhala: A Land of Mystery”