Space is Not Empty: The Omnipresent Proteus

Posted on September 22, 2018 by Theosophy Watch | Leave a comment

“THERE are many false ideas that are dterived from the ‘Big Bang’ dogma. The point is simple: This dismal, depressing, lifeless, soulless, disconnected, Godless, pessimistic goo is what allegedly constitutes our reality.”

“Although this reality is promoted by the editors at Wikipedia, those gatekeepers did not sanctify Albert Einstein or contrive the Big Bang.

“This propaganda is perpetuated by establishment cosmologists who reside in the ivory towers of big government and big academia. Intellectually these have been reduced to vested interests that have a lot to lose! Decades-long academic reputations, self-effacing public proclamations, thousands of peer-reviewed PhD theses, and billions in research grants funded by the taxpayers are all at stake.

“But like their gravity-only theory, the Big Bang charlatans are rife to keeping the taxpayer and layperson disconnected from the emerging reality wrought by hard scientific data. The latest scientific discoveries that refute the gatekeepers emerge from a discipline called plasma cosmology.”

“What is finally that invisible and intangible ‘God’ in whom we should believe on blind faith?” H. P. Blavatsky asked in The Secret Doctrine Vol. 1:490 — [thus denying the ‘charlatan’ gravity]. She wrote:

“Astronomers who see in gravitation an easy-going solution for many things, and an universal force which allows them to calculate thereby planetary motions, care little about the Cause of Attraction. They call Gravity a law, a cause in itself. We call the forces acting under that name effects,and very secondary effects, too.

One day it will be found that the scientific hypothesis does not answer after all.”

The Flame of Matter

“Matter (or nature) acting by her own peculiar energy,” writes a Master, “must have always existed — its materials ever changing form, combinations and properties, but its principles or elements being absolutely indestructible.

“Its motion is due to the force
which is inherent in itself.”

The Fundamental State of Matter

Space is not Empty

(What The Secret Doctrine says, by H. P. Blavatsky):

“The Initial Existence in the first twilight of the Maha-Manwantara (after the Maha-Pralaya that follows every age of Brahma) is a conscious spiritual quality. In the manifested worlds (solar systems) it is, in its objective subjectivity, like the film from a Divine Breath to the gaze of the entranced seer. It spreads as it issues from Laya throughout infinity as a colourless spiritual fluid. It is on the seventh plane, and in its seventh state in our planetary world.

“It is Substance to our spiritual sight. It cannot be called so by men in their waking state; therefore they have named it in their ignorance ‘God-Spirit.’

“…the active (male) potency of the Shakti (female reproductive power) in nature. The essence of cosmic electricity. An occult Tibetan term for Daiviprakriti, primordial light: and in the universe of manifestation the ever-present electrical energy and ceaseless destructive and formative power. Esoterically, it is the same, Fohat being the universal propelling Vital Force, at once the propeller and the resultant.” – H. P. Blavatsky

“It [spiritual substance] exists everywhere and forms the first Upadhi (foundation) on which our World (solar system) is built. Outside the latter it is to be found in its pristine purity only between (the solar systems or) the Stars of the Universe, the worlds already formed or forming; those in Laya resting meanwhile in its bosom. As its substance is of a different kind from that known on earth, the inhabitants of the latter, seeing through it, believe in their illusion and ignorance that it is empty space.

There is not one finger’s breath  (angula) of void Space in the whole Boundless (Universe).

“Matter or Substance is septenary within our World, as it is so beyond it. Moreover, each of its states or principles is graduated into seven degrees of density.”

* This (teaching) does not refer to Prakriti-Purusha beyond the boundaries of our small universe.
† The ultimate quiescent state: the Nirvana condition of the seventh Principle.
‡ The teaching is all given from our plane of consciousness. 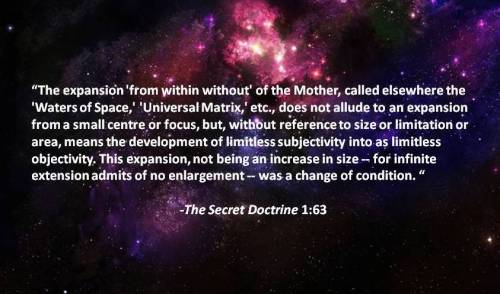 … “fore-ordained” — by no God in particular, but occurred in virtue of the eternal and changeless Law which causes the great periods of Activity and Rest, called so graphically, and at the same time so poetically, the “Days and Nights of Brahma.” The expansion “from within without” of the Mother, called elsewhere the “Waters of Space,” “Universal Matrix,” etc., does not allude to an expansion from a small centre or focus, but, without reference to size or limitation or area, means the development of limitless subjectivity into as limitless objectivity.

“The ever (to us) invisible and immaterial Substance present in eternity, threw its periodical shadow from its own plane into the lap of Maya.”

“It implies that this expansion, not being an increase in size — for infinite extension admits of no enlargement — was a change of condition. It ‘expanded like the bud of the Lotus’ — for the Lotus plant exists not only as a miniature embryo in its seed (a physical characteristic), but its prototype is present in an ideal form in the Astral Light from ‘Dawn’ to ‘Night’ during the Manvantaric period, like everything else, as a matter of fact, in this objective Universe — from man down to mite, from giant trees down to the tiniest blades of grass.  (The Secret Doctrine 1:62-63)