Life on Spaceship Earth and the Overview Effect

DURING the Chicago World’s Fair in 1893, the Theosophical Society participated in the first World’s Parliament of Religions.

“Every nation, every civilization has brought forward this doctrine, and the facts of history show us that, more than at any other time … have seen this doctrine violated in society, in government, and in nations. So that at last men have come to say, ‘Universal brotherhood is very beautiful; it is something that we all desire, but it is impossible to realize.’ With one word they declare the noble doctrine, and with the other they deny the possibility of its ever being realized.”

“The overview effect is a cognitive shift in awareness reported by some astronauts during spaceflight, often while viewing the Earth from outer space.  It is the experience of seeing firsthand the reality of the Earth in space, which is immediately understood to be a tiny, fragile ball of life, ‘hanging in the void’, shielded and nourished by a paper-thin atmosphere. From space, national boundaries vanish, the conflicts that divide people become less important, and the need to create a planetary society with the united will to protect this ‘pale blue dot’ becomes both obvious and imperative.” (Wikipedia)

“In 1971, Navy Captain Dr. Edgar Dean Mitchell traveled on the Apollo 14 mission and became the sixth person to walk on the Moon. Instead of returning to Earth with moon rocks, Dr. Mitchell brought back a message of unity. While looking at the blue planet spinning outside his spacecraft window he experienced a transformative awakening and had a sense of the interconnectedness of all things.

“Although Dr. Mitchell has done what most of us only dream of doing – traveling in outer space – it is on Earth where he does his most important work. He followed his outer space samadhi by devoting himself to exploring the mind and the scientific and transcendental potential for a sustainable future on Earth.”

After he returned to Earth, Dr. Mitchell’s illuminating realization drove him to create the Institute of Noetic Sciences to scientifically explore in depth that powerful oneness moment and to further the realization of our human potential.

It had suddenly come to him that the molecules and cells of our bodies “must have had their origin in those faraway stars.”  At that moment an overwhelming realization of the interconnectedness of all life dawned on him. It was a life-altering flash of insight — not an “intellectual knowledge,” he says, but in a “visceral knowing.”

It was accompanied by a very blissful feeling that I had never experienced before.

Dr. Mitchell describes being completely engulfed by a profound sense of universal connectedness he explains in an excerpt from Renée Scheltema’s visionary film, Something Unknown is Doing We Don’t Know What. Renée is a Dutch documentary filmmaker and photographer

Having had such a life-changing experience, sometimes called the Overview Effect, the former astronaut, attempts to interpret the non-linear feelings and insights for the rest of us.

“The Overview Effect, while intuitively valid to many, is often marginalized as a philosophical, metaphysical or aesthetic epiphany, not the fundamental perspective-altering experience that both astronauts and scientists suggest that it is,” The Overview Institute says. 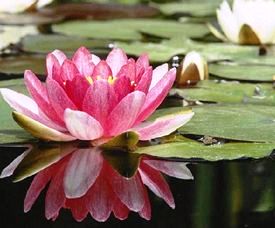 ‘As Above, So Below’

The First Object of the Theosophical Movement laid down by its Adept Founders through H. P. Blavatsky establishes the principle of universal unity and interconnectedness. As broadly stated in The Key to Theosophy:

To form the nucleus of a Universal Brotherhood of Humanity without distinction of race, colour, or creed.

And as elaborated esoterically in her The Voice of the Silence: “Compassion is no attribute. It is the LAW of laws — eternal Harmony, Alaya’s SELF; a shoreless universal essence, the light of everlasting Right, and fitness of all things, the law of love eternal.”

Often misunderstood, and under-appreciated, the “Third Object” of the Theosophical Movement, proposes deep inner connective forces as the heritage of all beings in Nature, but especially necessary to be consciously expressed by human beings as a spiritual obligation:

To investigate the hidden mysteries of Nature under every aspect possible, and the psychic and spiritual powers latent in man especially.

This last focus of the theosophical mission statement is not just about so-called “astral” powers, but is concerned with the importance of the powers of the goddess “psyche”— “noetic” is a word that in Greek means soul or breath, the higher aspect. 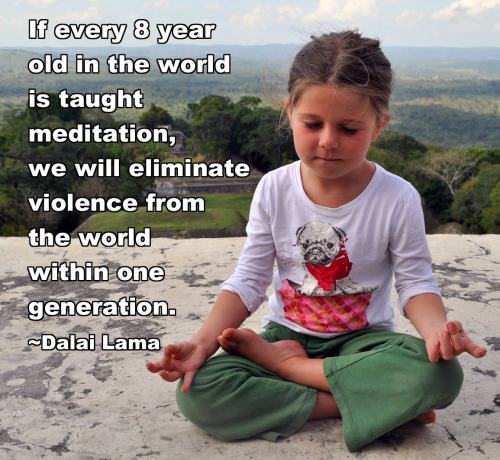 The student is thus directed to study ‘soul’ powers. Such would certainly include the power of mind over matter (telekinesis}, and the power of thought, the keynote of Buddha’s teachings.

The essential key to Buddha’s outlook is revealed in the opening verse of the Dhammapada:

Sigmund Freud the “father of psychoanalysis,” reportedly named The Buddha “the greatest psychologist of all time.” Gautama Buddha, the awakened Indian Sage, with his teaching about the dynamic, formative power of human thought, may well rank as the world’s greatest healer.

The stature of Buddha’s words are confirmed by anyone familiar with recent scientific evidence revealing the potent interaction between our heart, thought, and body fields. The video clip below from “The Living Matrix” reveals new insights into our bodies, minds and health—information that will transform your understanding of how to get well and stay well.

This breakthrough film provides an up-close look at the science of information as medicine. Leading researchers and health practitioners share their discoveries on the “miracle cures” traditional medicine can’t explain.

The spirit and body bond, modulated by biofields, taught by the ancient masters of Theosophy such as Krishna, Laotse and Buddha, is critical to understanding the integral nature of personal development. This concept of physical, emotional, mental and spiritual biofields is the missing keystone to physical, mental and emotional health.

Without stimulation of our biofield (energy body), altruism has no soil in which to grow and flower. H. P. Blavatsky referred to the growth of altruism as “an integral part of self-development.” 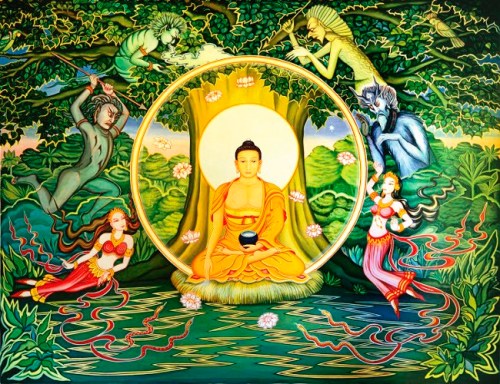 It is one’s duty “to give all that which is wholly his own and can benefit no one but himself, if he selfishly keeps it from others. Theosophy teaches self-abnegation, but does not teach rash and useless self-sacrifice, nor does it justify fanaticism.”

In one of the most significant verses of The Voice of the Silence, that Blavatsky translated from The Book of the Golden Precepts, one finds a simple but profound description of the process.

The practice of Buddha’s heart doctrine, encapsulated there, is almost too profound a truth for Western minds to fully grasp, and is daringly simple:

Self-Knowledge is of
loving deeds the child.

The acquirement of self-knowledge means the effective bonding of our Spirit (or intuition) with our Mind. In Sanskrit, this is known as the union of “Buddhi-Manas.” It is expected, in the course of spiritual evolution, a new human will at last emerge out of this self-initiated alchemy.

It is a process of occult transformation that will give birth to civilizations of the future, where every person will naturally manifest a permanently embedded higher consciousness.

In 1990, Carl Sagan persuaded NASA to use the Voyager 1 spacecraft to take a photograph of the planet Earth from a distance of 4 billion miles. The result was simply arresting: a portrait of our home as a tiny, fragile speck of blue adrift in an unimaginably vast sea of space. In a commencement address for the public release of the photograph, astronomer Sagan offered these profound words: 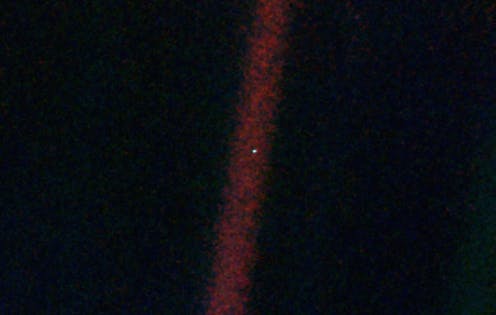 Carl Sagan’s book Pale Blue Dot was inspired by an image taken, at Sagan’s suggestion, by Voyager 1 on February 14, 1990.

“Look again at that dot. That’s here. That’s home. That’s us. On it everyone you love, everyone you know, everyone you ever heard of, every human being who ever was, lived out their lives. The aggregate of our joy and suffering, thousands of confident religions, ideologies, and economic doctrines, every hunter and forager, every hero and coward, every creator and destroyer of civilization, every king and peasant, every young couple in love, every mother and father, hopeful child, inventor and explorer, every teacher of morals, every corrupt politician, every ‘superstar,’ every ‘supreme leader,’ every saint and sinner in the history of our species lived there – on a mote of dust suspended in a sunbeam.”

The transformation, or raising-up, is not in interposing of an outside, personal god, but the overview effect us a descent of our Higher Self — the only God man can ever know.  In her Appendix on Dreams in the Secret Doctrine Commentary (Transactions of the Blavatsky Lodge) — Mme. Blavatsky instructs her students in this:

Remember that the only God man comes in contact with is his own God, called Spirit, Soul and Mind, or Consciousness, and these three are one.

“But there are weeds that must be destroyed in order that a plant may grow. We must die, said St. Paul, that we may live again. It is through destruction that we may improve, and the three powers, the preserving, the creating and the destroying, are only so many aspects of the divine spark within man.” 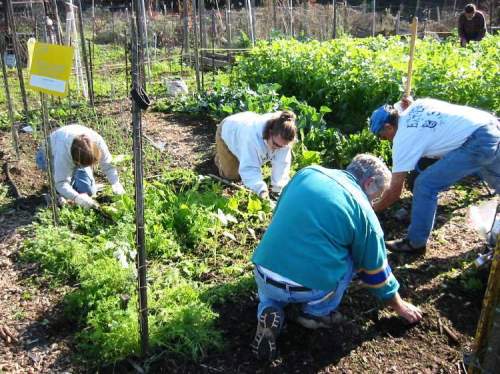 “It is through destruction that we may improve, and the three powers, the preserving, the creating and the destroying, are only so many aspects of the divine spark within man.”

This process what Theosophy calls the synthesis of the ‘head’ and the ‘heart’ and its development is predicted to be the eventual (and only) savior of our humanity and our cosmic home, planet Earth.

It is a state of holistic awareness that we experience at times when we have a ‘gut feeling’ or an intuitive flash — much as did astronaut Edgar Mitchell looking out from the vantage of his spaceship.

For the advanced Masters of Life, the Self-Awakened state is not merely a transitional “aha” moment, however transformative, but an ever-present, continuous manifesting of altruism and selflessness.

Such spiritual expansion is surely the only antidote to human selfishness, the result of the constant and consistent practice of loving deeds affecting others and the whole of humanity.