Laws of Karma and the Sin of Separateness

MAY DAY, in medieval and modern Europe, holiday (May 1) is the celebration of the return of spring, an ancient Nature Festival.

Because the Puritans of New England considered the celebrations of May Day to be licentious and pagan, they forbade its observance, and the holiday never became an important part of American culture.

Thankfully, time and tide wait for no man according to Geoffrey Chaucer, nor do such Nature’s supreme powers submit to the dictates of modern despots, gods or saviors, or religious bigots.

The Laws of Karma rule always. No one is so all-powerful they can stop the march of time or turn back the ocean waves, as King Canute unsuccessfully tried. Or the relentless march of time and seasons.

Yet what he learned from the experience is that the best each of us can do is attempt to discover and live in harmony with nature’s immutable laws. Shakespeare dramatized karma as a force that ebbs and flows cyclically, and that one must go with the flow. As Brutus notoriously exclaims in Julius Caesar:

There’s a tide in the affairs of men, which taken at the flood, leads on to fortune.

Procrastinating and obstruction waste precious moments allowing beneficial waves or tides to begin to recede. If a moral or environmental opportunity is neglected, individuals and humanity as a whole may suffer dire consequences. 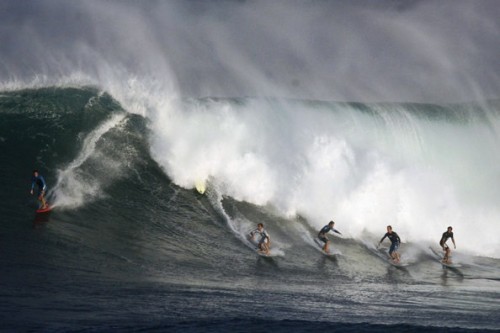 A tide in the affairs of men.

“All the passing shows of life, whether fraught with disaster or full of fame and glory, are teachers; he who neglects them, neglects opportunities which seldom the gods repeat,” W. Q. Judge wrote in his Essay on Chapter 2 of  the Bhagavad-Gita. “And the only way to learn from them is through the heart’s resignation;

for when we become in heart completely poor, we at once are the treasurers and disbursers of enormous riches. Krishna then insists on the scrupulous performance of natural duty.

Ancient Atlantis, our former habitat, was destroyed by natural and human-caused climate change thousands of years before its time, and we are heading down a very similar, dangerous path — the result of pervasive collective selfishness. Just as Walt Kelly’s Pogo warned, as he stared at a trash filled swamp on Earth Day 1970:

Sickness occurs when “a group of individual cells refuses to cooperate, and wherein is set up discordant action, using less or claiming more than their due share of food or energy,” wrote W. Q. Judge in The Synthesis of Occult Science, concluding:

Disease is nothing more or less than ‘the sin of separateness.’

So long as there is separateness and selfishness, Theosophy says, there will be suffering. And this is why we need to practice Divine Compassion, “the law of laws” as described in The Voice of the Silence.

“Compassion is something really worthwhile. It is not just a religious or spiritual subject, not a matter of ideology,” says the Dalai Lama: “It is not a luxury. It is a necessity.” 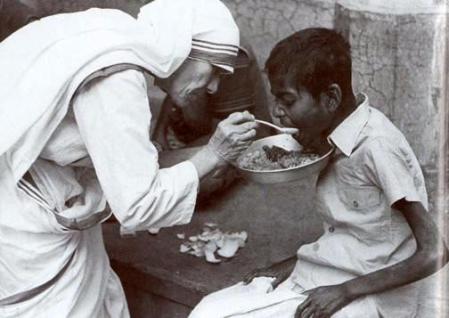 “It is an absolute fact that without good works the spirit of brotherhood would die in the world—and this can never be,” Blavatsky wrote in her article Let Every Man Prove His Own Work:

Therefore is the double activity of learning and doing most necessary; we have to do good, and we have to do it rightly, with knowledge.

The proverb about time and tide illustrates the complex interplay between fate and free will in human life. It has karmic beauty as well, suggesting that while we do not have total control over our lives, we do have a responsibility to take what few measures we can to live ethically and honorably.

“Each man is a Karmic agent … in our daily actions, even the smallest, whether we are conscious or not of the effect, we are such agents,” according to W. Q. Judge, (Article: Men Karmic Agents). “A single word of ours may have an influence for a lifetime upon another. We may be the means of another’s being late for an appointment and thus save him from calamity or the reverse, and so on infinitely.”

There is no master higher than Gautama Buddha, says the esoteric school (fn 34), due to the “great renunciation and sacrifice to mankind.” But even one so wise and benevolent cannot interfere with the law of karma, the larger cycles must “run their rounds,” it is taught. 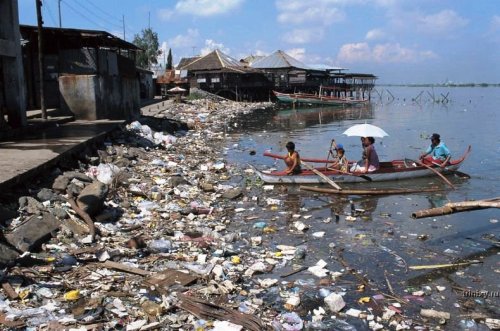 In a letter addressed to a Theosophist one of the authors of The Secret Doctrine, Mahatma KH, admits that “the major and minor yugas [cycles] must be accomplished according to the established order of things — periods of mental and moral light and darkness succeed each other as day does night.”

And we, borne along on the mighty tide, can only modify and direct some of its minor currents.

In Zoroastrian scriptures, there is a simple verse: “Happiness to him through whom happiness flows to others.” In a few words it teaches that when another’s happiness is considered, when something is done for the benefit of others, it results in one’s own happiness. 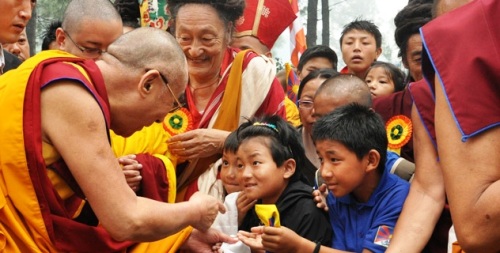 The same idea is emphasized by Madame Blavatsky explaining “What is Practical Theosophy in The Key to Theosophy Section 12: “Our philosophy teaches us that the object of doing our duties to all men and to ourselves the last, is not the attainment of personal happiness, but

..the happiness of others–the fulfillment of right for the sake of right—not for what it may bring us.

“Happiness, or rather contentment, may indeed follow the performance of duty,” she wrote, “but is not and must not be the motive for it.”

Absent from the head doctrine religion of materialism, and found throughout Indian philosophy, is the idea of Dharma or duty Mme. Blavatsky wrote in Section 12 The Key to Theosophy: “that which is due to Humanity. Modern ethics are beautiful to read about and hear discussed — but what are words unless converted into actions?”

“Finally: if you ask me how we understand Theosophical duty practically and in view of Karma, I may answer you that

our duty is to drink without a murmur to the last drop, whatever contents the cup of life may have in store for us.

“To pluck the roses of life only for the fragrance they may shed on others, and to be ourselves content but with the thorns, if that fragrance cannot be enjoyed without depriving some one else of it.”

A higher calling she describes as “duty to our fellow-men, neighbours, family, and especially that which we owe to all those who are poorer and more helpless than we are ourselves,” concluding:

This is a debt which, if left unpaid during life, leaves us spiritually insolvent, and moral bankrupts in our next incarnation. Theosophy is the quintessence of duty.

One stray “junkyard dog” demonstrates more fearlessness and compassion than all the intellectual Ayn Rands’ and selfish, self-serving extremists of the world put together.

personal interest in the welfare of those who suffer, personal sympathy, forethought and assistance in their troubles or needs.

There is an ingrained resistance in science, fostered by decades of misplaced neo-Darwinian dogma, which tells us that humans evolved altruistic traits as a result of a cultural price we paid each other early in our evolution, in order to survive.

This is a most distressing and degrading view of humanity, we think,  in which selfishness and altruism are simply pawns in a game of roulette-style evolution.

The compassionate activist and social justice reformer Julia Butterfly Hill, is an example of someone who understands first hand Theosophy pure and simple. taking action, as taught in The Voice of the Silence —sacrificing her comfort and well-being to “help Nature and work on with her.”

“The trinity of nature is the lock of magic, the trinity of man the key that fits it,” Blavatsky famously wrote in her first work Isis Unveiled 2:635:  “Many men have arisen who had glimpses of the truth, and fancied they had it all. Such have failed to achieve the good they might have done and sought to do, because vanity has made them thrust their personality into such undue prominence as to interpose it between their believers and the whole truth that lay behind.

“The world needs no sectarian church, whether of Buddha, Jesus, Mahomet, Swedenborg, Calvin, or any other. There being but ONE Truth, man requires but one church – the Temple of God within us

— walled in by matter but penetrable by anyone who can find the way – only the pure in heart see God.

“There is only one religion,” wrote George Bernard Shaw, “though there are a hundred versions of it.”

“Samyak Sambuddha, the Teacher of Perfection, gave up his SELF for the salvation of the World, by stopping at the threshold of Nirvana — the pure state,” says the Book of the Golden Precepts. “Sweet are the fruits of Rest and Liberation for the sake of Self…

but sweeter still the fruits of long and bitter duty. Aye, Renunciation for the sake of others, of suffering fellow men.

“He who becomes ‘Pratyeka-Buddha’ makes his obeisance but to his Self,”says the Book of the Golden Precepts: “Prakyeka buddhas are those Bodhisattvas who strive after and often reach the Dharmakaya robe [personal advancement] after a series of lives.

“Caring nothing for the woes of mankind or to help it, but only for their own bliss, they enter Nirvana and — disappear from the sight and the hearts of men.”

“The Bodhisattva who has won the battle, who holds the prize within his palm, yet says in his divine compassion: “For others’ sake this great reward I yield” — accomplishes the greater Renunciation. A Saviour of the World is he.”

In Northern Buddhism a ‘Pratyeka Buddha’ is a synonym of spiritual Selfishness.

“What you call ‘Christian duties’ were inculcated by every great moral and religious Reformer ages before the Christian era.

“All that was great, generous, heroic, was, in days of old, not only talked about and preached from pulpits as in our own time, but acted upon sometimes by whole nations. The history of the Buddhist reform is full of the most noble and most heroically unselfish acts.

Giving arms at a temple.

Be ye all of one mind, having compassion one of another; love as brethren, be pitiful, be courteous; not rendering evil for evil, or railing for railing; but contrariwise, blessing

“…[this] was practically carried out by the followers of Buddha, several centuries before Peter. The Ethics of Christianity are grand, no doubt; but as undeniably they are not new, and have originated as ‘Pagan’ duties.”

“And how would you define these duties, or ‘duty,’ in general, as you understand the term? It does not require metaphysics or education to make a man understand the broad truths of Karma and Reincarnation.

Look at the millions of poor and uneducated Buddhists and Hindoos, to whom Karma and re-incarnation are solid realities, simply because their minds have never been cramped and distorted by being forced into an unnatural groove. 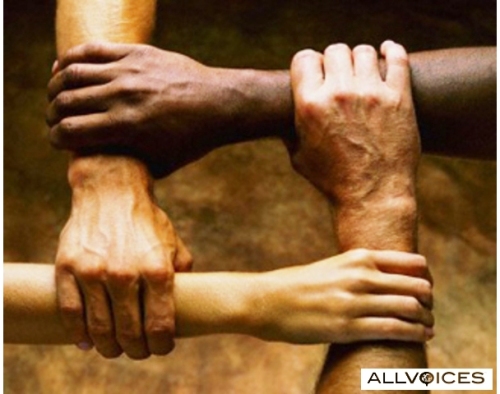 “They have never had the innate human sense of justice perverted in them by being told to believe that their sins would be forgiven because another man had been put to death for their sakes.

And the Buddhists, note well, live up to their beliefs without a murmur against Karma, or what they regard as a just punishment.

“The Christian populace neither lives up to its moral ideal, nor accepts its lot contentedly,” Blavatsky concludes: “Hence murmuring, and dissatisfaction, and the intensity of the struggle for existence in Western lands.”

3 responses to “Laws of Karma and the Sin of Separateness”