“We Come from God Who is Our Home” 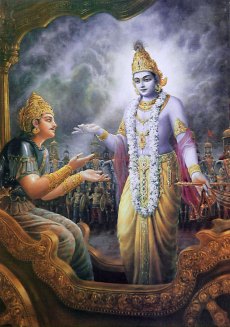 IN the ancient Hindu Bhagavad-Gita Krishna assures his disciple, an uncertain Arjuna, that both have lived many lives on Earth.

“Both I and thou have passed through many births,” the Master tells his disciple, adding: “mine are known unto me, but thou knowest not of thine.”

“It’s hard to believe,” writes the Blavatsky Theosophy Group UK, in an article titled A Right Understanding of Reincarnation, that until 130 years ago hardly anyone in the Western world had heard of reincarnation or knew anything about it.”

One reason for the disbelief around this teaching is that most people cannot remember having a past life. This is because, in strictly practical terms, the immortal soul enters and uses a new physical body, new astral body, new personality, and a new physical brain. A new brain, cannot be expected to ‘register’ a previous life it was never there to witness.

Being thus handed an empty photo album by Nature has to be a challenge to the incoming soul by hindering it finding a connection to prior experiences and knowledge. “The new ‘personality,'” Blavatsky explained, “is no better than a fresh suit of clothes.” (The Key to Theosophy, Ch. 8)

Siddhartha-Buddha meditating under the Bo Tree

Even so, by a mysterious process, “the record or reflection of all the past lives must survive,” H. P. Blavatsky wrote: “for when Prince Siddhartha became Buddha the full sequence of His previous births were seen by Him.”

In such a state he was able, she says, “to retrospectively trace the lines of all his lives. This proves to you that the undying qualities of the personality — such as love, goodness, charity, etc., attach themselves to the immortal Ego,

photographing on it, so to speak, a permanent image of the divine aspect of the man who was.

“To our talpatic, or mole-like comprehension, [http://bit.ly/2YP74Sq], the human spirit is then lost in the One Spirit, as the drop of water thrown into the sea can no longer be traced out and recovered. But de facto it is not so. 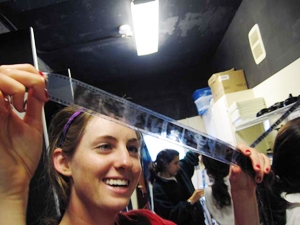 “However long the ‘night of Brahma’ or even the Universal Pralaya [Sleep] – (not the local Pralaya affecting some one group of worlds) – yet, when it ends,

“though on a higher, hundredfold perfected and more pure chain of earths than before, and brings with it all the essence of compound spiritualities from its previous countless rebirths.” 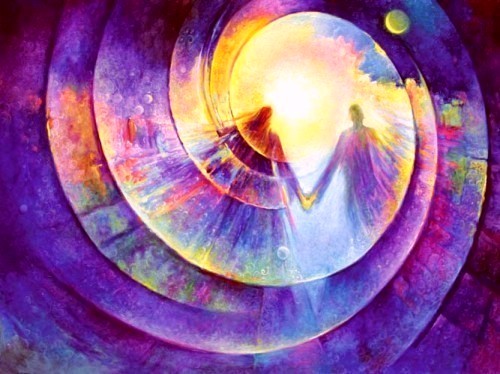 “Spiral evolution, it must be remembered, is dual, and the path of spirituality turns, corkscrew-like, within and around physical, semi-physical, and supra-physical evolution.”

The mind doesn’t fully incarnate until age seven, (Key to Theosophy Section 9). Thus, a child doesn’t feel the full weight of life and karma right away. As such, they are like karma-less little Buddhas.’

If not pressured to conform by parents and society, it is possible for them to express memories of their former lives, i.e. experience the ‘intimations of immortality’ for an extended period. 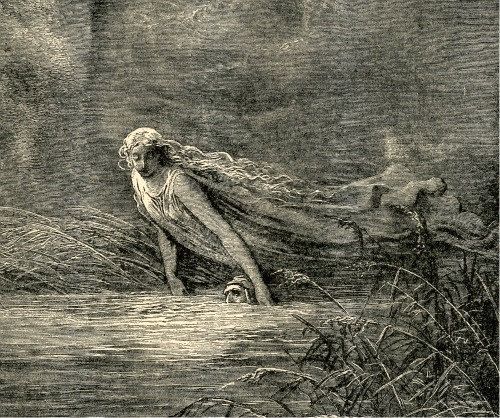 Dante And The River Of Lethe, by Gustave Dore

“Spirit got itself entangled with gross matter,” Blavatsky wrote in The Theosophist, “for the same reason that life gets entangled with the fetus matter. It followed a law, and therefore could not help the entanglement occurring.”

We know of no eastern philosophy that teaches that ‘matter originated out of Spirit.’ Matter is as eternal and indestructible as Spirit and one cannot be made cognizant to our senses without the other—even to our, the highest, spiritual sense.

“It was Plotinus who said that ‘our body is the true river of Lethe, for ‘souls plunged into it forget all’ — our terrestrial body is like Lethe” (the “river of forgetfulness” in the Hades of Greek mythology.)” Using a modern analogy, a new computer cannot be expected to recall the data stored on the discarded one, unless the old data is preserved and reinstalled in the new machine.

But this is what sometimes happens with children who die at an early age from accidents or illness if in their short lifetime they had created no basis for a prolonged after-death dream state. Nature is never wasteful, and the still viable astral body is not disintegrated as with normal death but reused by the reincarnation of the child.

The still vital and alive astral matrix is attracted back into the soul’s new body, with all its memories preserved intact. Thus in many cases, such children are said to be born with two astral bodies, one new, the other old with memories still intact.

Why do most children not remember? One reason is the huge volume of information generated in past lives is mostly like the disappearing RAM memory of a computer. The bulk of the lifetime’s data is, Blavatsky says, “as evanescent as a flash of lightning, and cannot impress the new brain of the new personality.” Yet, she says:

…their failing to do so in no way impairs the identity of the re-incarnating Ego.

Children are naturally obsessive and tirelessly focused on their play (‘the play’s the thing’ said Shakespeare.) This ability makes them possibly the best meditation experts on the planet. Even after a long day, and despite complete physical exhaustion, children must be repeatedly called to dinner, sometimes well after adults have eaten.

With such intense experiences focused on ‘now’ we don’t expect kids to think about meal times, or to remember school, or doctor’s appointments. Parent’s do it for them.

Yet even with such natural distractions, a body of research shows some children do remember past lives, even saddled with materialistic modern parenting and other hindrances, including our modern educational methods.

Such children reportedly have vivid recollections of their previous parents, of specific places and events, and can recall highlights of a variety of associated events and emotions they once experienced.

The poet Wordsworth applied memories of his own early childhood to his adult philosophy of life and art. Citing his famous”Intimations of Immortality,” a writer on Wikipedia believes the poet

was inspired in part
by Platonic philosophy. 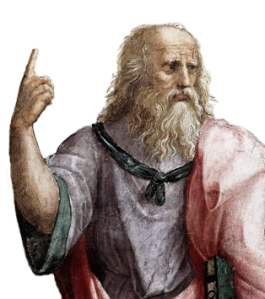 Plato from Raphael’s The School of Athens

On preexistence and rebirth, Plato described how the soul dwelt in an ideal alternate state prior to its present occupation of the body, and how the same soul will return to that ideal state again after death. Immortality for Wordsworth the article goes on, refers to the immortality of the soul, which the poet maintained “is felt or intimated during early childhood.”

Ode on Intimations of Immortality from Recollections of Early Childhood 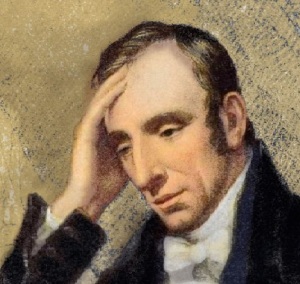 Our birth is but a sleep and a forgetting:
The Soul that rises with us, our life’s Star,
Hath had elsewhere its setting,
And cometh from afar:
Not in entire forgetfulness,
And not in utter nakedness,
But trailing clouds of glory do we come
From God, who is our home:
Heaven lies about us in our infancy!
Shades of the prison-house begin to close
Upon the growing Boy, […]
At length the Man perceives it die away,
And fade into the light of common day. […]

We come “not in entire forgetfulness,” Theosophy teaches, yet influenced by a materialistic media, science, and religion, children are quickly cut off from what memories they might otherwise have of past lives.

Recollections and reminiscences are quickly smothered by ambitious parents too eager to conform to society’s expectations, and to institutionalized education, religious and science.

Sadly, any intimations of immortality we might have, are chased out of us in early childhood by the unbelieving worldviews of parents, teachers, and society.

The Second of the Three Fundamental Propositions of Theosophy provides the foundation teaching underlying cyclic reincarnations of the same individuality:

“‘The Eternity of the Pilgrim’ is like a wink of the Eye of Self-Existence — ‘Pilgrim’ is the appellation given to our Monad (the two in one) during its cycle of incarnations. It is the only immortal and eternal principle in us, being an indivisible part of the integral whole — the Universal Spirit, from which it emanates, and into which it is absorbed at the end of the cycle.”

can neither die nor lose its compound self-consciousness in Eternity, nor the recollection of its previous incarnations in which the two — i.e., the spiritual and the human soul — had been closely linked together.

The spiritual and human soul are not closely bound together, Blavatsky wrote, in the case of a materialist person:

whose human soul not only receives nothing from the divine soul but even refuses to recognize its existence.

Swing of the spiritual pendulum.

The cyclic movements of our Pilgrim Soul is described further by H. P. Blavatsky in Section 9 of her Key to Theosophy that “the spiritual Ego of man moves in eternity like a pendulum between the hours of birth and death.

But if these hours, marking the periods of life terrestrial and life spiritual, are limited in their duration […] the spiritual pilgrim is eternal.

“A proper and sane system of education,” Blavatsky declared, “should produce the most vigorous and liberal mind, strictly trained in logical and accurate thought, and not in blind faith.

“How can you ever expect good results, while you pervert the reasoning faculty of your children,” she wrote,

by bidding them believe in the miracles of the Bible on Sunday, while for the six other days of the week you teach them that such things are scientifically impossible?

Mme. Blavatsky developed her analysis of the ideal early childhood education in the Key to Theosophy:

“We would reduce the purely mechanical work of the memory to an absolute minimum,” she writes, “and devote the time to the development and training of the inner senses, faculties and latent capacities.”

Children should above all be taught self-reliance, love for all men, altruism, mutual charity, and more than anything else, to think and reason for themselves.

“We would endeavor to deal with each child as a unit and to educate it so as to produce the most harmonious and equal unfoldment of its powers, in order that its special aptitudes should find their full natural development.

We should aim at creating free men and women, free intellectually, free morally, unprejudiced in all respects, and above all things, unselfish.

“And we believe that much if not all of this could be obtained by proper and truly theosophical education.” 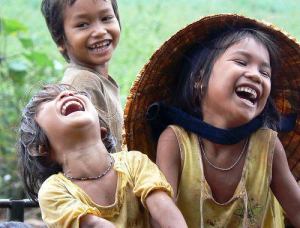 9 responses to ““We Come from God Who is Our Home””