The Mysterious Power of Life

OCCULTISM connotes by the word God, “the symbolic conception of the Life and Motion of the Universe.”

This is in stark contrast to the crude anthropomorphism, which is still the backbone of our current theology.

“The One Life is deity itself, immutable, omnipresent, eternal,” says the teaching of Theosophy.

And the distinction “between organic and inorganic matter is fallacious and nonexistent in nature.”

“Matter in all its phases, is merely a vehicle for the manifestation through it, of LIFE.

Therefore, “the whole secret of Life,” says The Secret Doctrine, can only be discovered “in the unbroken series of its manifestations: whether in, or apart from, the physical body. Because if —

‘Life, like a dome of many-coloured glass,
Stains the white radiance of Eternity…’ *

— yet it is itself part and parcel of that Eternity — for life alone can understand life.  It is the One Life, eternal, invisible, yet Omnipresent, without beginning or end.”  (*Adonais, by Percy Bysshe Shelley)

“Light is the first begotten, and the first emanation of the Supreme, and Light is Life, says the evangelist. Both are electricity — the life-principle, the anima mundi, pervading the universe, the electric vivifier of all things. 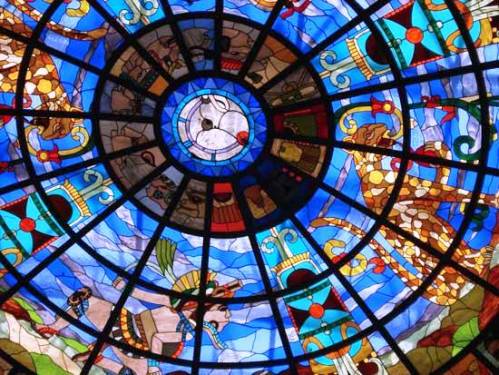 A Dome of many-colored glass.

“Light is the great Protean magician, and under the Divine Will of the architect, its multifarious, omnipotent waves gave birth to every form as well as to every living being.” (Isis Unveiled 1:258)

It is “periodical in its regular manifestations, between which periods reigns the dark mystery of non-Being — unconscious, yet absolute Consciousness — unrealisable, yet the one self-existing reality,” (The Secret Doctrine 1:2): — “truly, ‘a chaos to the sense, a Kosmos to the reason.'”

by H. P. Blavatsky
The Key to Theosophy, Section 5

“When we speak of the Deity and make it identical, hence coeval, with Nature, the eternal and uncreate nature is meant, and not your aggregate of flitting shadows and finite unrealities. We leave it to the hymn-makers to call the visible sky or heaven, God’s Throne, and our earth of mud His footstool.

Our DEITY is neither in a paradise, nor in a particular tree, building, or mountain: it is everywhere, in every atom of the visible as of the invisible Cosmos, in, over, and around every invisible atom and divisible molecule; for IT is the mysterious power of evolution and involution, the omnipresent, omnipotent, and even omniscient creative potentiality.

“In short, our Deity is the eternal, incessantly evolving, not creating, builder of the universe; that universe itself unfolding out of its own essence, not being made. It is a sphere, without circumference, in its symbolism, which has but one ever-acting attribute embracing all other existing or thinkable attributes — ITSELF. It is the one law, giving the impulse to manifested, eternal, and immutable laws, within that never-manifesting, because absolute LAW, which in its manifesting periods is The ever-Becoming.”

“I’ve looked at life from both sides now
From win and lose, and still somehow
It’s life’s illusions I recall,
I really don’t know life at all.”

“Like sailors in the Age of Exploration, dung beetles [the “Scarab” sacred Egyptian symbol of rebirth]  use the stars to navigate the night. Male dung beetles amass giant balls of dung to woo females, which lay their eggs in the nutritious dung.

“Males that take a meandering path with their dung balls are liable to get robbed by other dung beetles, while males that travel in a straight line are more likely to get to their destinations safely. A paper published in Current Biology last month (January 24) found that, to keep form getting lost in the dark, the beetles orient themselves using the Milky Way. (Click here or on the picture below for the Science link)

“Researchers discovered the beetles’ celestial talents while studying how they used the moon to navigate. One moonless night, they noticed that the beetles were still transporting their dung in relatively straight lines. “Even without the moon—just with the stars—they were still able to navigate,” coauthor Eric Warrant, a zoologist at Lund University in Switzerland, told ScienceNOW. “We were just flabbergasted.”

Talk about star power — a new study shows that dung beetles navigate via the Milky Way, the first known species to do so in the animal kingdom. 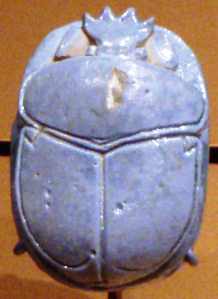 “This is the symbol of hope and the promise of a second birth for the Osirified dead,” (H. P. Blavatsky explains in The Secret Doctrine 1:365). “His Soul, after due purification in the Amenti, will gestate in this egg of immortality, to be reborn from it into a new life on earth.

“For this Egg, in the esoteric Doctrine, is the Devachan, the abode of Bliss; the winged scarabeus being alike a symbol of it. The ‘winged globe’ is but another form of the egg, and has the same significance as the scarabeus, the Khopiroo (from the root Khoproo ‘to become,’ ‘to be reborn,’) which relates to the rebirth of man, as well as to his spiritual regeneration.”

“The Egg was the symbol of life in immortality and eternity; as also the glyph of the generative matrix; and the tau, associated with it, only of life and birth in generation. In conjunction with the hawk, the symbol of Osiris-Sun, the symbol is dual: it relates to both lives — the mortal and the immortal. In Kircher’s OEdipus Egyptiacus (vol. iii., p. 124) one can see, on the papyrus engraved in it, an egg floating above the mummy. This is the symbol of hope and the promise of a second birth for the Osirified dead; his Soul, after due purification in the Amenti, will gestate in this egg of immortality, to be reborn from it into a new life on earth. For this Egg, in the esoteric Doctrine, is the Devachan, the abode of Bliss; the winged scarabeus being alike a symbol of it.”

The researchers confirmed their findings in a planetarium, where the beetles successfully navigated by the stars projected on the ceiling—either the entire night sky or just the Milky Way—but did poorly when there were few stars or when their view of the sky was obscured by pieces of cardboard on their backs.

“The wood frog (Rana sylvatica) inhabits forests ranging from the Appalachians to the Maritime provinces and west to northern Alaska, even to the Arctic Circle. Its overwintering site is a shallow burrow in the forest floor, well within the frost zone, that is overlain by leaves and other organic detritus. Our studies in southern Ohio suggest that wood frogs are subjected to several freezing episodes that typically last several days and expose the frogs to temperatures that fall as lows as -2° to -4°C; however, in more northerly regions they probably experience much lower temperatures and longer periods of frost.”
(Wood Frog Freezing Survival Laboratory Report)

“The whale scientists observed the pod battle to save the life of the struggling dolphin before it disappeared below the water of the Sea of Japan.” (LiveLeak.com)

Dolphins have been known to try to help calves in need, pushing them to the surface of the water or biting them to stimulate them. But a recent paper documents a more unusual display of supportive care: a group of long-beaked common dolphins trying to save a dying adult member of their species.

Scientists in a vessel off the coast of Korea observed the dolphins coming together to form a raft-like shape with their bodies, pushing the ailing dolphin to the water’s surface. One dolphin even propped up the sick dolphin’s head with its beak. Unfortunately, the dolphin died after a few minutes, but the other dolphins continued to support it, according to the paper published in Marine Mammal Science last month (January 18, 2013).

In another show of surprising supportiveness, a group of sperm whales adopted an adult bottlenose dolphin with a spinal deformation. Researchers discovered the dolphin while observing sperm whales in the North Atlantic and will publish their findings in the journal Aquatic Mammals.

“Sometimes some individuals can be picked on,” Alexander Wilson, a biologist at the Leibniz Institute of Freshwater Ecology and Inland Fisheries in Berlin who was with the group that spotted the dolphin, told ScienceNOW. ‘It might be that this individual didn’t fit in, so to speak, with its original group.’ As for why the sperm whales adopted the misfit, they could have benefited from social interaction with the dolphin, the authors noted.”

Stem-cell guru Robert Lanza presents
a radical new view of the universe
and everything in it.

“Figuring out the nature of the real world has obsessed scientists and philosophers for millennia. Three hundred years ago, the Irish empiricist George Berkeley contributed a particularly prescient observation: The only thing we can perceive are our perceptions. In other words, consciousness is the matrix upon which the cosmos is apprehended. Color, sound, temperature, and the like exist only as perceptions in our head, not as absolute essences. In the broadest sense, we cannot be sure of an outside universe at all.

“For centuries, scientists regarded Berkeley’s argument as a philosophical sideshow and continued to build physical models based on the assumption of a separate universe “out there” into which we have each individually arrived. These models presume the existence of one essential reality that prevails with us or without us.

“Yet since the 1920s, quantum physics experiments have routinely shown the opposite: Results do depend on whether anyone is observing. This is perhaps most vividly illustrated by the famous two-slit experiment. When someone watches a subatomic particle or a bit of light pass through the slits, the particle behaves like a bullet, passing through one hole or the other. But if no one observes the particle, it exhibits the behavior of a wave that can inhabit all possibilities—including somehow passing through both holes at the same time.

“Some of the greatest physicists have described these results as so confounding they are impossible to comprehend fully, beyond the reach of metaphor, visualization, and language itself. But there is another interpretation that makes them sensible. Instead of assuming a reality that predates life and even creates it, we propose a biocentric picture of reality. From this point of view, life—particularly consciousness—creates the universe, and the universe could not exist without us.”

The farther we peer into space, the more we realize that the nature of the universe cannot be understood fully by inspecting spiral galaxies or watching distant supernovas. It lies deeper. It involves our very selves.

“Is the web possible without the spider? Are space and time physical objects that would continue to exist even if living creatures were removed from the scene? Figuring out the nature of the real world has obsessed scientists and philosophers for millennia.”

“Is the web possible without the spider? Are space and time physical objects that would continue to exist even if living creatures were removed from the scene? Figuring out the nature of the real world has obsessed scientists and philosophers for millennia.”

(Readers are invited to click the link below to view
or download a copy of the original sheet music):

Life is the Builder of Forest and Glade
Life is the Hand that hath hewn and made, the
Peak of the mountain the green of the lea—
Life is the Maker of worlds that be.

2 responses to “The Mysterious Power of Life”