H. P. B.:
The Extraordinary Life and Influence of Helena Blavatsky 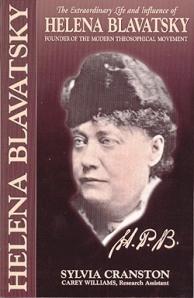 IN HER QUEST FOR TRUTH and universal brotherhood, H. P. Blavatsky opened a new realm of ideas to the world, influencing poets, writers, artists, philosophers, and scientists alike.

“…among the modern world’s trailblazing psychologists of the visionary mind.”

HPB married when she was 17 to the 40-year-old Nikifor Vassilievitch Blavatsky, but left him shortly thereafter and began more than 20 years of travel, bringing her into contact with mystic traditions of the world, not to mention the spiritual adepts who accepted her as their student.

In 1873, impelled by her teachers, she arrived in New York, USA, and tried to interest the spiritualists in the philosophy behind the phenomena.

The next year, Helena met Henry Steel Olcott and William Quan Judge and in 1875 they founded The Theosophical Society. Her claim that esoteric spiritual knowledge is consistent with new science may be considered to be the first instance of what is now called New Age thinking. In fact, many researchers feel that much of New Age thought started with Blavatsky.

About the same time she wrote her first major work, Isis Unveiled, and after its publication, in 1878, she and H. S. Olcott left for India, where they began to publish The Theosophist and established the Headquarters of the Society at Adyar, Madras.  William Judge then took on the task of establishing and spreading Theosophy throughout the United States and beyond.

In 1884, while she was traveling in Europe, a  couple serving as her staff in India brought charges of fraud against her after rigging up false devices at headquarters in their betrayal of HPB and her Masters. (They had been well paid by Christian missionaries to engage in this deceit and treachery.)

The Society for Psychical Research (SPR) investigated the charges, and subsequently published an unfavorable report. Blavatsky’s health had broken down, and in 1885 she left India for Europe, where she continued to write The Secret Doctrine, her masterwork. In 1887 she settled in London, and began a new magazine Lucifer, “Light-Bringer”.

In 1888, The Secret Doctrine was published and, in the same year, she and William Judge formed the Esoteric Section of The Theosophical Society and shortly afterward HPB wrote The Key to Theosophy and The Voice of the Silence.

Fascinating and moving to read. . . . Filled with encouragement, with the extraordinary eloquence of poetry, myth and religion . . . A massive encyclopedic gathering from the religions of both East and West, from science, psychology, philosophy. –Robert Kirsch, Los Angeles Times

I read every page of this magnificent book. It is a superb piece of work. Easily the finest and most comprehensive on this subject. –Rev. Leslie D. Weatherhead, former President of the Methodist Conference of Great Britain

The book is not intended as a polemic but rather as an invitation to an inward journey. . . . No other single source approaches this in scope of contents. –Choice Magazine, American Library Association

This classic anthology offers ancient and modern perspectives on Job’s question: ‘If a man die, shall he live again?’ Spanning over 5,000 years of world thought, the selections invite consideration of an idea that has found hospitality in the greatest minds of history.

Excellent reference and fascinating to read

I first encountered this book as a textbook for a class taught by Dr. H.P. French at Monroe Community College in Rochester, NY. He used the book for a history class entitled “History of Reincarnation”. The class was a combination of history, comparative religion, and philosophical thought and it was positively fascinating. I have re-read this book many times over the years, and I refer to it frequently. Whether you believe in reincarnation or not, I think this is essential reading on the subject and it will help you to understand the various perspectives on the idea of rebirth after death. The authors cover everything from Zoroastrianism to Hinduism to modern Western thought on the subject. This will be a wonderful addition to your library.

By Stan Kuiperi (Aruba) – See all my reviews

This is not just a book..it’s an experience that takes the reader on an incredible journey through time and history..and beyond! It’s about humankind and its fantastic, diverse spiritual development through the ages, but at the same time also about each and every one of us personally, whoever and wherever we may be.

The writing is so clear, the content so spell-binding and the consequences so mind-boggling I was profoundly immersed in it for weeks. Sorry Amazon, this one I’ll keep forever..to start re-reading soon!