ACCORDING to a “prophecy of the Secret Books,” America is even more important to the spiritual advancement of future humanity, than its legacy of individual freedoms.

Charles Thomson, who coined the motto on the Great Seal, “Novus Ordo Seclorum,” was a former Latin teacher.

Inspired by a line in Virgil’s Eclogue IV, he placed the motto beneath his vision of an unfinished pyramid.

Thomson explained its significance as “the beginning of the new American Æra,” which commences from the Declaration of Independence in 1776.

But an esoteric, spiritual prophecy speaks of a still higher purpose, that of forming a union of free future souls — an amalgamation of human beings of many races — who will be self-elevated morally, physically and spiritually.

“Occult philosophy teaches that even now, under our very eyes,” Blavatsky writes in The Secret Doctrine:

“… the new Race and Races are preparing to be formed, and that it is in America that the transformation will take place, and has already silently commenced.” 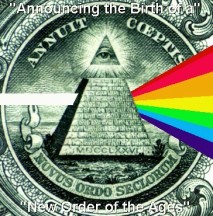 The Founding Fathers, many of whom were Freemasons, were strongly influenced by a Lodge of advanced Adepts —worked behind the scenes during the formation of the new nation from the beginning.

Such perfected Adepts, once human like ourselves, were described by Synesius of Cyrene in the Fourth century as the “sacred tribe of heroes.”

One of those adepts wrote: “and we will go on in that periodical work of ours…until that day when the foundations of a new continent of thought are so firmly built, that no amount of opposition and ignorant malice … will be found to prevail.” END_OF_DOCUMENT_TOKEN_TO_BE_REPLACED