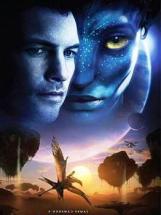 WHEN acting through human brains and bodies, our minds reveal a complex dual nature — a pivotal tenet of Theosophical psychology.

Mind’s higher aspect gravitates toward spirit, while the natural tendency of its physical reflection is attraction to form and desire.

Broadly considered, what is called higher mind is a soul faculty, our intuitional power source according to Theosophy — it is the “god” in man.

The alter-ego, our personal self, epitomized by the gut and brain consciousness, seems to be a conflicted mix of god and demagogue.

This enigma is dramatized by Dr. Jill Bolte Taylor in her New York Times bestseller “My Stroke of Insight.” As a brain researcher Dr. Taylor’s focus is of course anatomical, the left and right hemispheres. (See Love and Fury)

A metaphysical counter to the astrophysicist’s Cosmic Microwave Background (CMB,) is occultism’s Universal Mind or consciousness — the spiritual substratum of the universe, according to Theosophy.

Consciousness at this scale has no single locale, but like the CMB Radiation, is suffused throughout every atom in space (and the brain,) and may be likened to the screen in a movie theater — though it is much more than this as the reservoir of individual consciousness in man and nature.

Without this universal mind, like the metaphoric screen, there can be no conscious life experience — i.e., no “movie.”

In the ancient theosophical world all life was sacred, because all particles were “god particles” — just as there was one humanity linked indissolubly with nature, all imbued with one universal, divine substance-principle.

Ancient esoteric science is called the ‘thread-doctrine,’ Blavatsky insists, because it strings together

“… all the ancient philosophical religious systems, and reconciles and explains them all.”

"If the Universe is the Answer, What is the Question?"

Not only does esoteric science reconcile apparently conflicting systems, Blavatsky reminds us,

“… but it checks the discoveries of modern exact science, and shows some of them to be necessarily correct, since they are found corroborated in the ancient records.”

“Science is, undeniably, ultra-materialistic in our days,” Blavatsky writes, “but it finds, in one sense, its justification.” Because Nature behaving esoterically is only judged [by science] “through her appearance — and that appearance is always deceitful on the physical plane.”

“[Science] refuses to blend physics with metaphysics, the body with its informing soul and spirit, which they prefer ignoring.“

The existence of a unique “god particle” is unlikely — though 2,000 physicists from hundreds of universities and laboratories in 34 countries at the Large Hadron Collider at CERN are searching for it.

Even the contrasting belief of Intelligent Design owes its unconscious inspiration to this ancient tenet pointing to a conscious universe.

“Some people find God in church, some in the great outdoors,” argues Cecil Adams in The Straight Dope, “but it takes truly transcendent geekiness to find divinity in the Large Hadron Collider.”

The God of the LHC

It’s all about what Blavatsky refers to in her Secret Doctrine as “the One homogeneous divine Substance-Principle, the one radical cause.” This “force” is latent in every atom, and is “neither Spirit nor matter, but both,” occultism teaches.

And, the same teaching says:

“It is only through a vehicle of matter that consciousness wells up as ‘I am I’, a physical basis being necessary to focus a ray of the universal mind at a certain stage of complexity.”

What this has to do with our subject, is explained by the same occult physics. It asserts that once absolute consciousness begins to exhibit itself in a universe — as the electromagnetic force brightens a light bulb — a corresponding shadow is produced, and:

“… duality supervenes in contrast of spirit (or consciousness) and matter, subject and object.” 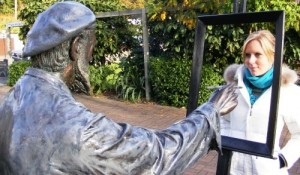 Becoming more human mind beings, occult psychology, necessarily results gradually in the loss of our “instinct” and favors reason, much like a growing child. But in losing this animal ability, man also loses “his intuitional powers, which are the crown and ultimatum of instinct.”

“Reason is the clumsy weapon of the scientists,” Blavatsky concludes, “— intuition the unerring guide of the seer.”

“There are as many neurons in the brain as there are stars in the Milky Way galaxy,” so it is not surprising, says encognitive.com, “that, ­despite the glow from recent advances in the science of the brain and mind, we still find ourselves squinting in the dark...”

“The play’s the thing,” said Shakespeare. Like a meditating hermit lost in a forest, an actor who remains backstage, or movie film left in the camera, fails to connect with others. The visceral mix of mind and emotion, enacted in the public square, alone insures we are having an interactive human experience, whether real or imagined.

Hamlet, or Alice in Wonderland, are lessons in an endless psycho-physiological looking glass — the karmic machinations of human beings, and is the stuff of enduring classics. 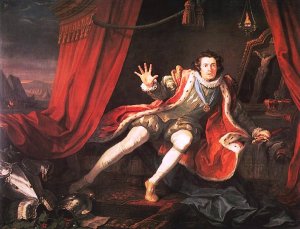 “A horse! a horse! my kingdom for a horse!” cried Shakespeare’s King Richard III. His sleep, just before the battle of Bosworth Field,  — haunted by the ghosts of those he has murdered — the King berates his higher mind with an agonized line:

“O coward conscience, how dost thou afflict me!”

As with Michael Behe’s examples, the irreducibly complex mousetrap and the eye, all parts of such mechanisms are required, or they cease to function. In themselves, there are no “bad” or “good” components — all are necessary.

This is just as true when it comes to man, and the natural world that sometimes imitates our gentler side.

Individual parts, like persons, are seldom error-free. In our material world everything is triple-checked. Harmony is always under siege during life, and has to be realized through trial and adaptation — the psychic meat and potatoes of actors, evolution and dogs.

“Help Nature and work on with her—and Nature will regard thee as one of her creators, and make obeisance.” -The Voice of the Silence

Common experience shows we must never assume that humans, or even man’s best friend, will always get it right — you cannot fool all the people all the time, as Lincoln wisely pointed out. For most of us, including dogs, it begs the wise guidance of a director, architect, conductor, school teacher, mentor or coach.

Cesar offers to trade dogs with Monica when it looks like her pit bull is “too much dog” for her to handle.

“Were it light alone, inactive and absolute,” Blavatsky wrote, “the human mind could not appreciate nor even realise it. Shadow is that which enables light to manifest itself, and gives it objective reality.”

“Therefore, shadow is not evil, but is the necessary and indispensable corollary which completes Light or Good: it is its creator on Earth.”

The shadow has many indispensable psycho-physiological functions, experienced personally by Dr. Jill Bolte Taylor, but it also has a nasty habit of trying to isolate itself from the spiritual aspects of mind. In other words, it can be a very selfish self.

Given this understanding, it should never be necessary for humans to fight like cats and dogs — but it hardly seems possible today, with so much emphasis placed on left-brain activity, to prevent the recurrence of hostilities between individuals and nations.

“Self is the friend of self and also its enemy.”

“The real evil,” one of Blavatsky’s teachers wrote, “proceeds from human intelligence and its origin rests entirely with reasoning man who dissociates himself from Nature.

“Humanity then, alone, is the true source of evil.”

Victor and Ibrahim are two men caught in a community-wide conflict that threatens not just their livelihood, but their lives as well,” writes Nathan Clarke in Christianity Today – March 2, 2010 8:09 AM:

“Neighbors, shot on location in Jos, Nigeria, examines what happens when segments of a community oppose one another in a standoff that appears to have no solution. This is a story not only of Jos, but of places throughout the world where historical differences of tribe, race, and religion lead to violent conflicts.” (Copyright © 2010 Christianity Today):

“The deadly strife between spirit and matter, between light and goodness and darkness and evil,” Blavatsky writes in “Thoughts on Ormuzd and Ahriman.”

It began on our globe “with the first appearance of contrasts and opposites in vegetable and animal nature,” she warns, “and continued more fiercely than ever after man had become the selfish and personal being he now is.”

“Nor is there any chance of its coming to an end before falsehood is replaced by truth, selfishness by altruism, and supreme justice reigns in the heart of man. Till then, the noisy battle will rage unabated.”

Denise Jaunsem, "Cat in the Woods"

“Evil is the exaggeration of good, the progeny of human selfishness and greediness,” wrote Master KH. “Think profoundly and you will find that save death — which is no evil but a necessary law, and accidents which will always find their reward in a future life —

“… the origin of every evil whether small or great is in human action, in man whose intelligence makes him the one free agent in Nature.”

Jane Elliot, studies the effects of segregation and racism on a third grade classroom. On the night of the day that Martin Luther King was murdered, she had an idea of how she might give her third-graders a sense of what prejudice and discrimination really meant.  (PBS Frontline, Producer William Peters)

In our mental life it’s the same — the job of the higher-mind (Plato’s “Nous”) is to inspire, direct, guide and adjust. This is also Simon Magus’ Nous and Ennoia, or the familiar story of Adam and Eve.

According to the Gnostics, Blavatsky says, “these two principles are immutable Light and Shadow, Good and Evil being virtually one and having existed through all eternity,

“… as they will ever continue to exist so long as there are manifested worlds.”

With the Ophites, “both were the ‘Logoi’ or Unity ‘manifesting itself as a double principle of Good and Evil.'”

Denise Jaunsem, "Shadow of the Oak"

The true human person, in Theosophy, is called “Manas” or the reincarnating perceiver. It is immortal in essence, enduring in its higher aspects through the entire sweep of triple evolution — physical, mental and spiritual.

“As a Unity, Ennoia and Ophis are the Logos,” said Blavatsky. “When separated

“… one is the Tree of Life (spiritual), the other, the Tree of Knowledge of Good and Evil.”

“Manas” (Sanskrit − from the root “man” − to think) is the eternal perceiver — the third and self-aware state of consciousness in the descending scale from the non-dual formless spirit, to the complexity of sense and substance.

That Friday in April, 1968, was not a normal morning. Producer William Peters (PBS Frontline) continues the story of how Jane Elliott changed her lesson plan on the morning after Martin Luther King Jr. was killed.

“Manas is dual — lunar in the lower, solar in its upper portion,” says The Secret Doctrine,

“… and herein is contained the mystery of an adept’s as of a profane man’s life, as also that of the post-mortem separation of the divine from the animal man.” 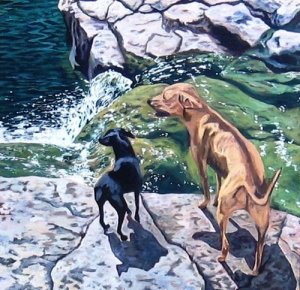 “At present manas [higher mind] is not fully developed in mankind,” W. Q. Judge wrote, “and kama or desire is still ascendant. In the fifth round [next cycle], however, manas will be fully active and developed in the entire race…

“Hence the people of the earth have not yet come to the point of making a conscious choice as to the path they will take.”

“But when in the cycle referred to, Manas is active, all will then be compelled to consciously make the choice to right or left — the one leading to complete and conscious union with Atma [Spirit] — the other to the annihilation of those beings who prefer that path.”

A Buddha and His Dog

Use All of Me

3 responses to “Healing the Beast”