Posted on March 9, 2012 by Theosophy Watch | Leave a comment 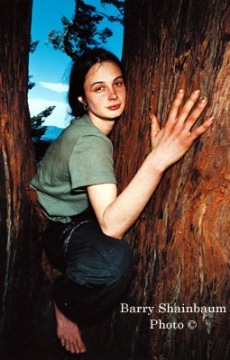 THE famous meditation of John Donne, “never send to know for whom the bell tolls, it tolls for thee,” highlights two Theosophical principles:

First, the affirmation that there is no isolation, that nature and all mankind are interconnected — and second, karmic responsibility.

“It’s one thing to fashion a particular work of art, sculpture, painting, a worthy accomplishment,” Thoreau once wrote, “but much greater is the creation of one’s life.”

A compassionate activist tree-sitter Julia Butterfly Hill, took action as taught in The Voice of the Silence, and is surely a living example of Theosophy pure and simple. Julia willingly sacrificed her comfort and well-being, as the Voice counsels, to “help Nature and work on with her.”

“…to exemplify the highest potential imagined, it is the highest of loving artistic accomplishments,” Thoreau believed.

“The divine oneness of life, the just and unerring operations of karma, and our cyclic rebirths here on earth,” Ingrid Van Mater writes in Reflections on the Voice of the Silence, “form the broad canvas on which aspects of human conflicts and possibilities are presented.”

One of the primary keynotes of the Voice, Van Mater notes, is the “illusion stemming from the ‘heresy of separateness,’ and the discipline and exercise of the paramitas or virtues required of a genuine adept or teacher. These include charity, harmony in word and act, patience, fortitude, and indifference to pleasure and pain.”

“She doesn’t follow any organized religion but says she believes very strongly in the spirituality of the universe.”

It must have been some inner, instinctual sense of harmony that roused Julia, as she climbed up those ropes into Luna, a 20-story Redwood, to begin her precarious encampment as a human shield in the endangered redwood trees.

“Such is the quality of commitment, the degree of self-sacrifice of a bodhisattva or Buddha of Compassion,” Van Mater wrote, “who gives himself totally to join those, ‘unthanked and unperceived by man,’ who build and sustain the Guardian Wall protecting mankind, to shield us and this planet ‘invisibly from still worse evils.'”

Julia in the Storm

Julia Butterfly Hill climbed a 2000 year old redwood in Northern California and lived in its branches for over 2 years to save it from the chainsaws of a logging company. Her first winter she was nearly killed as a terrible storm raged through her tiny perch. Julia describes the horror, and the life lessons, of those terrifying hours.

In his collection of essays on spiritual life, the rebel Trappist monk, Thomas Merton, poetically describes the intimate relationship between “human” and “nature:”

“Those who love their own noise,” he said, “are impatient of everything else.”

“They constantly defile the silence of the forests and the mountains and the sea. They bore through silent nature in every direction with their machines …”

“There are some men for whom a tree has no reality until they think of cutting it down,” he wrote, “men who never look at anything until they decide to abuse it and who never even notice what they do not want to destroy. These men can hardly know the silence of love…”

Working to create a world where people are part of strong and vibrant communities, have a personal sense of purpose, and are having fun while making a difference — The Engage Network “operates through small purpose-driven groups of people taking action together in their communities.”

“The Engage Network also plans to link these small groups and support groups in creating more groups. This is much like the way a starfish works in nature.

“If a starfish loses its arm, it often grows a new one. In some breeds of starfish, the lost leg even grows a whole new starfish!”

“It is a decentralized system
where everyone shares power.”

“We want you to know that people in the What’s Your Tree Program are a part of this larger network of people who have a dream of a better world based in environmental and social justice, peace and sustainability.”

Find out more: The Engage Network

“You, yes you,
make the difference”

“Our DEITY is neither in a paradise, nor in a particular tree, building, or mountain,” wrote H. P. Blavatsky, “it is everywhere, in every atom of the visible as of the invisible Cosmos—in, over, and around every invisible atom, and divisible molecule—

“…for IT is the mysterious power of evolution and involution, the omnipresent, omnipotent, and even omniscient creative potentiality.”

“In 1996 she suffered nearly fatal injuries in an auto accident. During nearly a year of medical treatment and recovery, she had time to reassess her purpose in life. Two weeks after being released by her doctors, she headed west on a journey of self-discovery. She had no particular destination, but

“…her first sight of the redwoods overwhelmed her with awe.” 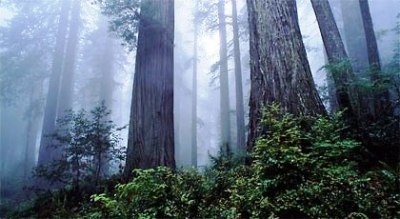 “When I entered the great majestic cathedral of the redwood forest for the first time,” she said, “my spirit knew it had found what it was searching for.

“I dropped to my knees and began to cry because I was so overwhelmed by the wisdom, energy, and spirituality housed in this holiest of temples.'”

“THE pilgrim who would cool his weary limbs in running waters, yet dares not plunge for terror of the stream, risks to succumb from heat. Inaction based on selfish fear can bear but evil fruit.”

–The Voice of the Silence

Helena Blavatsky took her beliefs about One Life, of interconnectedness of the Whole, to a similar level. It was an acknowledgement of the spiritual consciousness of the Earth. It was evidence, she wrote in The Secret Doctrine (1:111) of the intelligent purposefulness of the Gaia goddess:

“There is a plan in the mind of nature, down to the glow-worm and simple daisy.”

Theosophy teaches that the wave of life with all its many forms is sacred, and the essence of Deity is everywhere and embedded in every form. Too often the sacred life around us are harmed by human greed, waste and carelessness, and the damage subsequently  ignored or justified for commercial gain.