TODAY is the summer solstice in the Northern Hemisphere, which means it’s the longest day of the year in 2011.

The exact moment of the solstice today will occur at 1:16 p.m. ET. In the Southern Hemisphere, today actually marks the 2011 winter solstice.

As with mythology, such traditions appeal to our imagination and are open to different interpretations.

“Although revolution and change often appear to be precipitated by things that happen to us from without,” theosophical astroblogger Lauren Coleman assures us:

“this process of revolution is also dependent on an inner evolution, an unfolding from within.”

“Heralding the beginning of summer and the longest day of the year,” writes astrologer Elaine Kalantarian, “the June solstice was called Midsummer by the Celts.”

Many people believe that the summer crop circles in Wiltshire UK carry a symbolically encoded message. (Click here, or on the photo below to view the latest circles.) 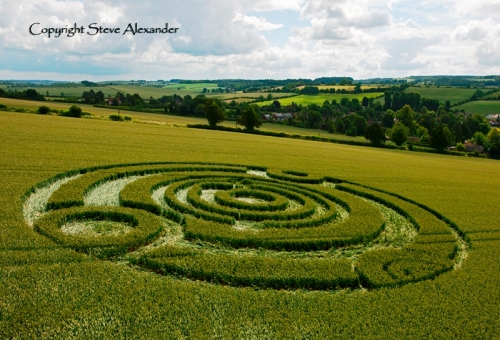 Symbology experts such as researcher Freddy Silva, imagine that the enigmatic designs in growing fields are sacred geometry, and may represent ‘mandalas of hope’ for our troubled world.

Theosophical scholar, David Pratt, thinks so. In his engaging article “Crop Circles and their Message,” he theorizes: “The basic element of crop glyphs is the circle which can symbolize unity, boundless space, and the universal creative spirit or godforce.”

“Crop circles with rings and satellite circles sometimes resemble diagrams of the chemical elements, with their orbiting electrons.”